Stuffed cabbage rolls show up on menus across the cultural spectrum. They’re like opinions: everyone has them. (At least you can eat the cabbage roll.)

This dish lost its historic symbolism by the time my grandmother started cooking them for her kids, my father and his sister. My aunt doesn’t remember ever paying attention to her mother making them, but she still makes her own using a crockpot with a side of mashed potatoes.

Of course, traditional dishes like this one are usually more than just something with which to stuff your face. They’re usually wrapped up in cultural or religious significance. In that respect, stuffed cabbage roles played an important role in Ashkenazi Jewish cuisine.

Traditionally, stuffed cabbages were also known by Ashkenazi Jews, in Yiddish, as holishkes. They were cooked during the holiday of Sukkot to celebrate a bountiful harvest. On Simchat Torah, the day following the end of Sukkot, a pair of cabbage rolls side-by-side were meant to represent a Torah scroll, commemorating the end of the annual cycle of Torah readings.

Food historian and author of the "Encyclopedia of Jewish Food" Gil Marks wrote that the dish first entered the Jewish culinary canon in Iran 2,000 years ago. From there, it spread across Yiddishland from the Russian Empire and Poland to Hungary and the Balkans, where it was likely influenced by the neighboring Turkish sarma.

“Most of the traditional foods we eat on Jewish holidays start out with a seasonal reason as to why we eat them, and later a religious significance is tacked on,” Marks said in a 2012 interview with the Jewish Telegraphic Agency. “Vegetables like cabbage were in season during the fall and very cheap, so stuffed cabbage became one of the most popular traditional foods eaten. Cabbage was the odor of the shtetl.”

These days, few look upon cabbage rolls as the sexiest of dishes. Cabbage as a vegetable seems to have been unfairly tarnished as a relic from the diets of our grandparents or even great-grandparents. The dress code for such a dish is retirement home casual.

Thankfully, a new generation of Ashkenazi cooks feels differently. From Leah Koenig, who wrote the tome on Jewish cooking with the apt name “The Jewish Cookbook,” to The Gefilteria’s Liz Alpern and Jeffrey Yoskowitz, celebrating old school Ashkenazi cuisine through writings and events, stuffed cabbage rolls are something to look forward to again.

I don’t have any vivid memories of eating this dish as a kid. But I’m a sucker for a passport full of stamps and am drawn to the traveling record of stuffed cabbage rolls. For my recipe, I incorporated tips from my aunt and blended them with some of my favorite contemporary takes on the dish, like Shannon Sarna's at The Nosher. Instead of going with the traditional meat stuffing, I use a mirepoix (carrots, onions, and celery) with seasoned lentils. Then it’s all buried in a baking dish full of tomato sauce spiced with cinnamon, fresh basil, oregano, brown sugar, white vinegar, and lemon juice.

We all have our favorite spices for tomato sauce, so please do make it your own. The same goes for the stuffing. This is the kind of dish you can experiment with relative ease. However you go, you’re bound to impress friends and family when you serve up a perfectly rolled cabbage leaf with a bit of fresh parsley for garnish. Nothing quite gives that cozy heimisch feeling quite like holishkes in the fall. Es gezunterheyt! 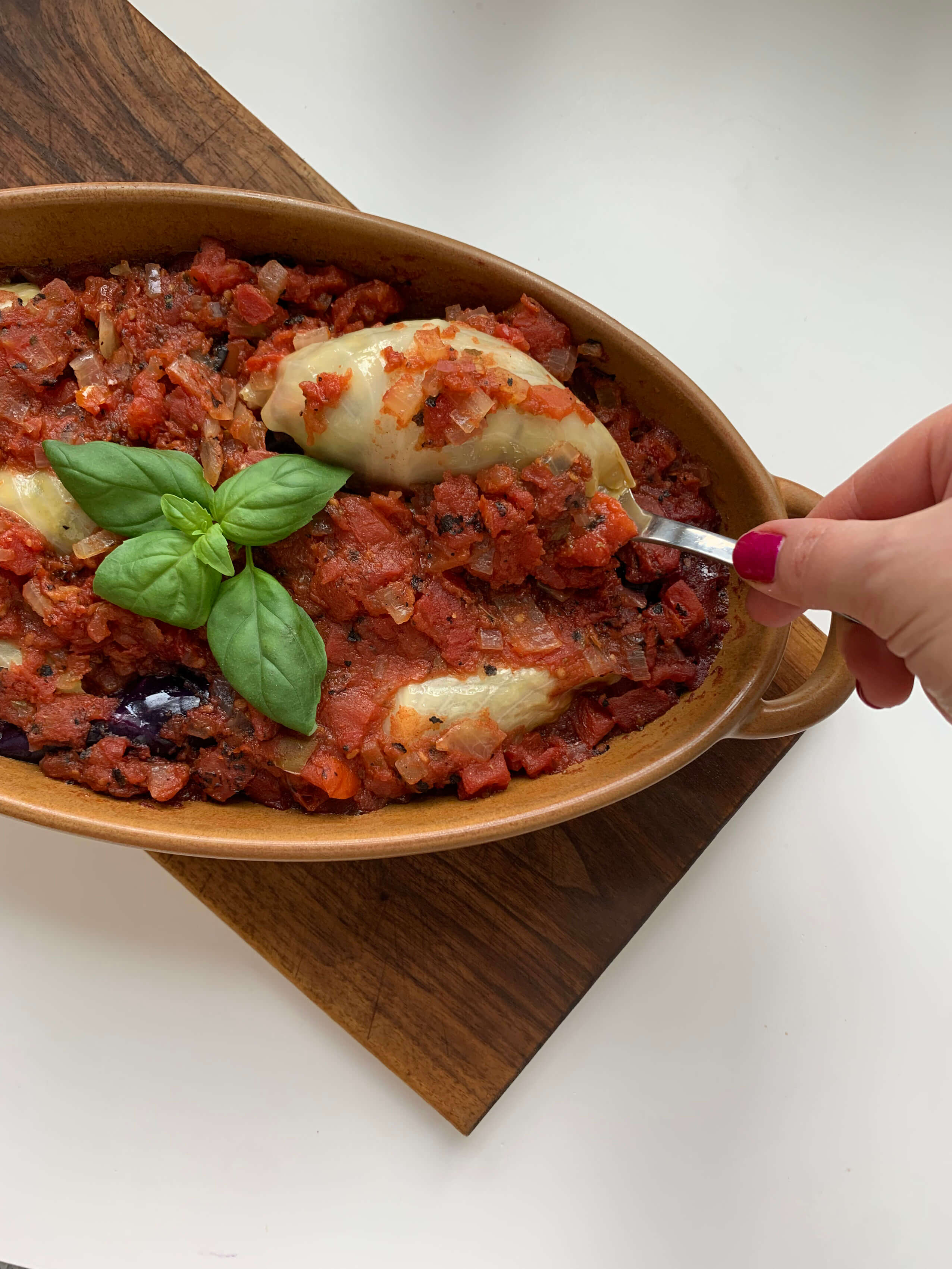 If You Haven't Tried Squash on a Pizza, You're Missing Out