When in Greece, a Spanish Chef Cooked me an Italian Frittata I’ll Never Forget

After college, I lived and worked in London, attempting to balance exploring a foreign city and saving my pounds to backpack across Europe. I ate loads of hot vinegar-sprinkled chips from paper cones, made arugula salad for my lunch break instead of following my coworkers to the pub while dreaming of candy-sweet tomatoes from Mediterranean farms.

An expiring work visa set my London departure date: By mid-April, my traveling companion and I had quit our jobs and were off to our first stop – Greece – before the influx of island hoppers and seasonal beach parties. We were perhaps too early. Many businesses were relaxing in the calm before the tourist storm and closed. We buddied up with a couple of other travelers, became casual friends with locals, and ate our first Southern European foods. The connections we made during those weeks still stand out.

In Greece, I tasted my first sheep’s milk yogurt, with a rich tangy flavor I crave and seek out to this day. I discovered feta goes well with everything from tomatoes and sweet peppers to figs and oranges. And I fell for frittata.

Frittata is considered an Italian dish, but I rarely saw it on a bar menu when I traveled in Italy. The locals mostly seemed to make it casually at home with leftovers. Built of whatever was at hand, layered with egg and potato, it could be described as a crustless quiche or open-face omelet.

Instead of finding it in Italy, I first tasted frittata in Greece, cooked by a Spanish woman. We were staying in a nearly deserted hostel in a quiet village. For our first meal, its Greek owner directed us to the taverna across the street, run by his Spanish wife. Unsure of what I was ordering, I picked frittata because it was vegetarian and fit my tiny daily backpacker budget. One bite, and I was hooked.

The frittatas made by this taverna owner and chef piled on the season’s flavors. Along with eggs from the hens wandering the yard, she packed in enough tender potatoes, just-ripe vegetables, and fresh feta that I could explore the island until bedtime on that meal. I was back at that cafe every day enjoying a frittata the entire time I stayed on the island.

At home, I make frittata when I need a quick lunch or dinner. You could cook it for breakfast (or, like I do, eat leftover frittata cold), but with a salad or crusty bread it becomes a full meal. I keep my frittatas vegetarian, but precooked meat could be added to the onion, potato, and egg base.

The rest of the filling can vary with what’s fresh in season and lurking in your fridge. In spring, I pair baby spinach with asparagus and, when I find them, morel mushrooms. Summer means tomatoes and peppers with basil or zucchini and eggplant with fresh dill. By fall, I’m adding thinly sliced carrots, roasted garlic, and chard.

I make this version with spinach and herbs year-round. Faster than quiche, easier than folding an omelet, and filling enough to serve on its own, frittata should be on everyone’s quick-meal list. 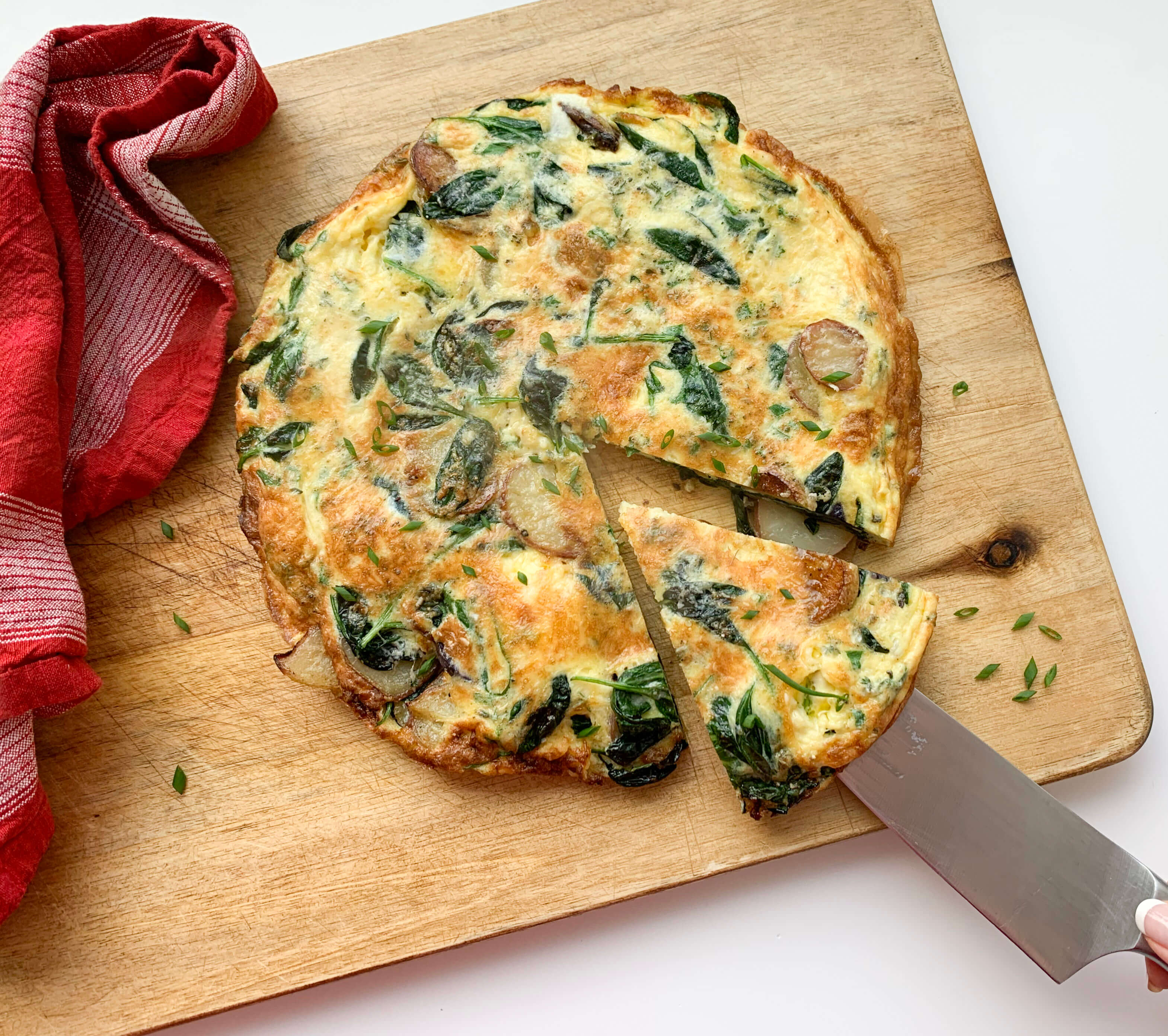 2. While the potatoes finish cooking, crack the eggs into a medium bowl and whisk them with the cream or milk, thyme or oregano, chives or scallions, salt, pepper, and cheese. Set aside. Set the oven broiler to low.

3. When the potatoes are tender, add the spinach to the skillet and toss with the other vegetables for 30-45 seconds, until wilted.

4. Pour the egg mixture over the vegetables and lower the heat to medium-low and cook, undisturbed, for 3-4 minutes until eggs are semi-set - firm at the edges but still liquid in the center of the pan.
5. Top with additional cheese and slide the skillet onto the top oven rack under the broiler for 3-4 minutes, until the surface is puffy and lightly browned. The frittata is done when the center does not jiggle or slosh when the pan is gently shaken from side to side. Use potholders to remove the hot skillet from the oven.

If the top of the frittata is browning too quickly before the center sets, carefully remove the frittata from the oven and return it to the burner. Cover the pan with a lid and steam over low heat until the eggs are fully set – 2-5 minutes. Remove the lid immediately and remove the pan from heat.

6. Let the frittata cool for 5 minutes and then loosen the edges with a thin or rubber spatula until the frittata slides gently in the pan when shaken. Carefully slide the frittata from the pan onto a serving platter or large cutting board, being mindful of any excess oil in the pan, before slicing into wedges. Serve hot, warm, or at room temperature with optional additional herbs and/or sour cream. Store leftovers in a sealed container in the fridge.