It’s always hard to get kids to eat their vegetables.

When I was a young girl, there were long nights full of stand-offs — just me, a big plate of salad, and my mom waiting for me to finish it. I’d only be free to go once she turned her back and I had surreptitiously stuffed everything under my seat cushion. Of course, secrets never remain hidden. Months later, there would be the revelation of rotten vegetables smashed into dining room chairs and shouts of horror at the discovery.

Somehow, though, eating my greens was never a problem whenever I ate Korean food while growing up in Queens, even when we went out to a Korean BBQ restaurant, where the main focal point of the meal is grilled meat. I realize now that a large part of it was because the vegetables were just innocently presented as a side dish, blanched down, pickled, accompanying meat and rice as a wrap, or 쌈 (ssam). Vegetables were always brilliantly overshadowed by the “star” of a meal — the grilled meat — but in reality, they took up a lot more of the space and stomach room. That’s why, when I found out recently that South Korea has the highest per capita consumption of vegetables because of namul, or greens, I was surprised, but not really.

The way that Korean food is generally served, there are small dishes available called 반찬 (banchan) that are brought out at the beginning of every meal. The portions are small, presented in shallow dishes about 4-5 inches in diameter. The sign of an accomplished homemaker or fancy restaurant is the number of 반찬 (banchan) presented — sometimes numbering upwards of 20 different dishes! 반찬 (banchan) accompanies every meal with rice, and that forms the base of a meal, though you can also add other things such as a soup or a protein.

When I was young, we'd go out to eat Korean BBQ for special occasions, and I remember being incredibly excited, waiting for the meat to come out. But of course it would take a while for the grill to heat up, the meat to be cooked, and then served. During that time, the 반찬 (banchan) was set out. Here, spinach never took front and center, giving you empty promises that you’d be as strong as Popeye if you could choke down an entire can. Instead, it was cooked down and mixed with a savory and light mixture of soy sauce, garlic, and sesame oil as 시금치나물 (shigeumchi namul).

It was one of the tiny dishes we would pick at mindlessly while we waited in anticipation for the meat to be finished. The dishes were so small that we never even noticed they were constantly being refilled, being so fixated on the meat grilling in the middle of the table. The spinach was wilted down so that we didn’t even realize there were probably pounds of it quietly being doled out in cute portions — a rare and healthy way that mindless eating filled us up with greens before the meat was ready.

And then, when the barbecue was finally ready, we’d eat it with rice, sliced peppers and green onions, and garlic, all wrapped up crunchy and crisp in a lettuce wrap. It was the best way to eat our vegetables and still the best way for me now as a grown-up to eat my greens. At the very least, all of it ends up in my stomach, and not moldering on the bottom of a seat cushion! 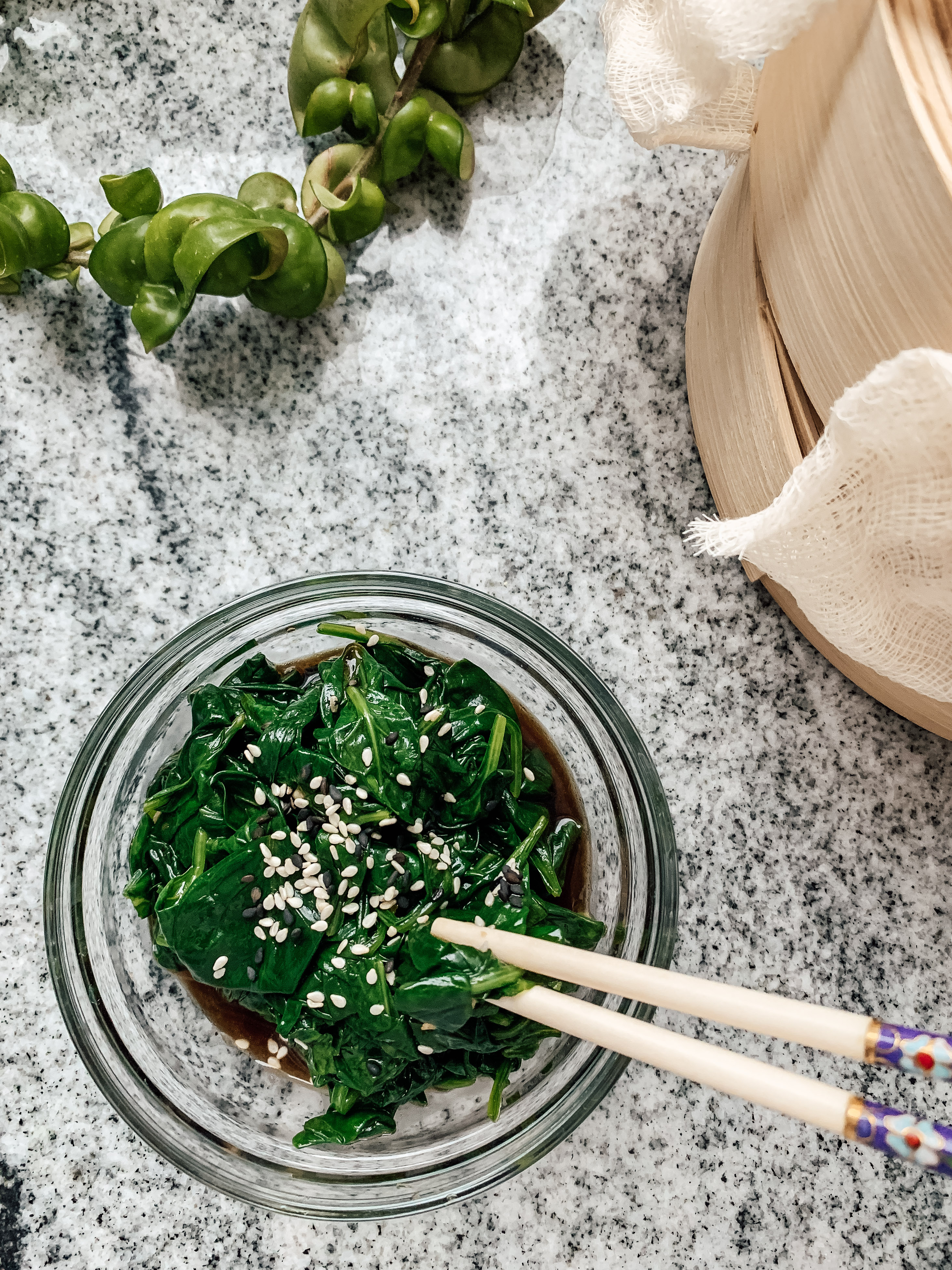