This Kale Galette with Savory Frangipane May Break Some Baking Laws. Call the Pastry Police, I Don’t Care

I'd like to throw a little frangipane love your way. Frangipane? You're probably asking yourself. With greens?? Oh yes, I say to you.

Or maybe you’re simply wondering what the heck frangipane even is. Traditionally a sweet almond custard enriched with eggs, frangipane is layered onto or inside baked goods to add texture and sweetness, and is often eaten with a spoon by underpaid pastry cooks who have been working in the restaurant’s basement since the early hours of the morning. If you’ve enjoyed an almond croissant, you’ve enjoyed frangipane.

When I was working as that sleep-deprived pastry cook I really fell in love with the stuff -- not just the creamy nuttiness that puffs up so appealingly around whatever you nestle into it, but the fanciness of the word itself. "Almond-egg-butter goo" just doesn't roll off the tongue like frangipane does. Plus using French pastry words makes everyone from your hometown who may have thought that cooking for a living is just like an episode of Diners, Drive-Ins & Dives consider the fact that you might be a very sophisticated person who is in no way still in debt from culinary school!

For years I used frangipane in all of the traditional ways -- croissants, pithiviers, tarts. But in my view it's simply too delicious and too versatile to limit to these special occasion desserts. I began experimenting with the classic ratios of frangipane and eventually came up with my very favorite version: savory frangipane. Can it technically be called frangipane if it doesn't have sugar in it? I'm not a pastry lawyer, so I can't say for sure! But what I do know is that a creamy combination of nuts, butter and eggs (plus a few secret additions that would make a classical chef's toque spin) is just about the best foil for a pile of garlicky greens I have ever made. 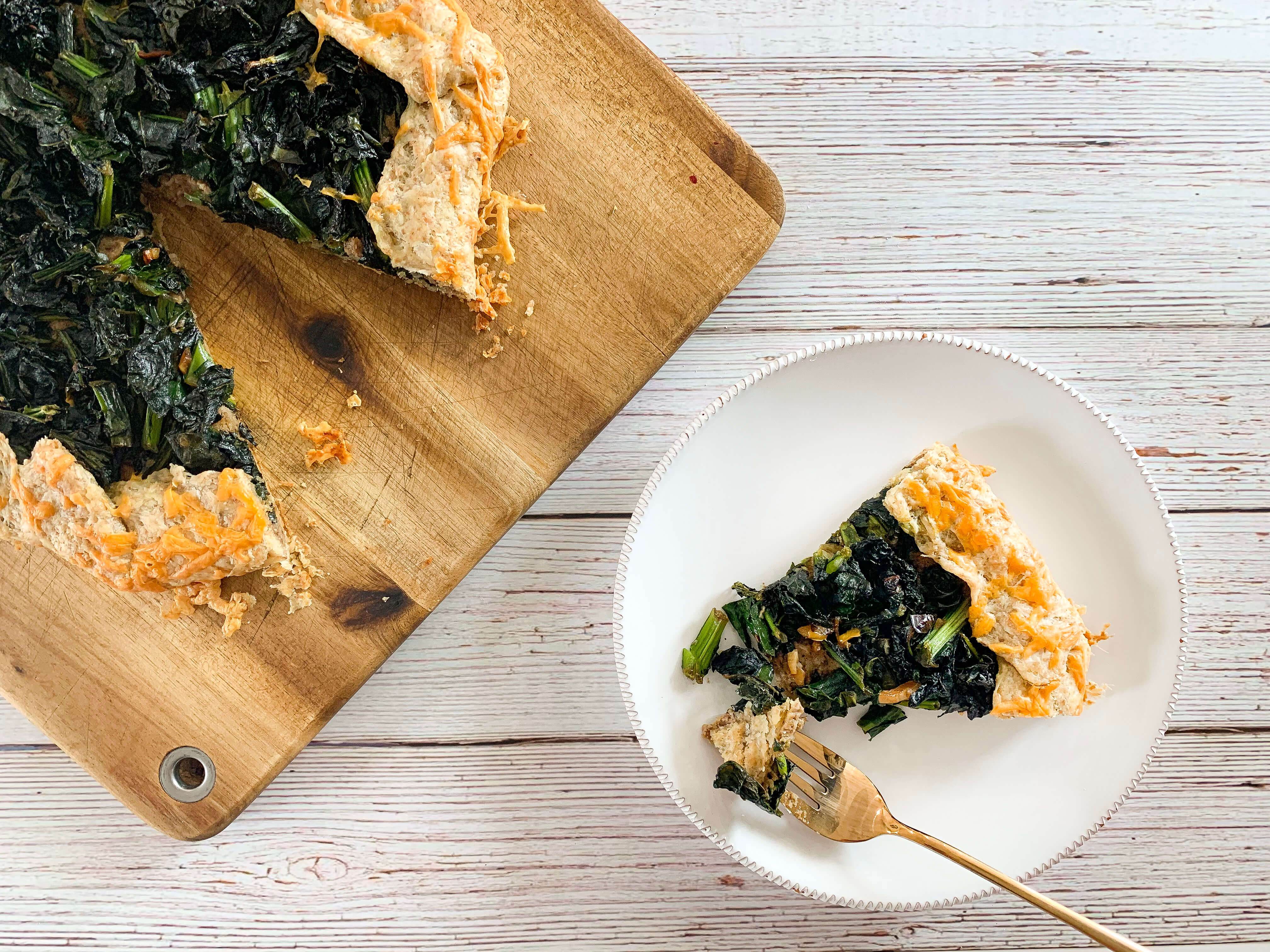 1. Make the kale: In a large skillet, heat olive oil over a medium flame until the surface just begins to shimmer. Add the chopped garlic and chili pepper and cook, stirring constantly, until the garlic begins to smell incredibly fragrant, about 1 minute. Add the kale and, using tongs, gently toss to combine. At first it might seem like an impossibly large amount of kale for the skillet, but it will quickly wilt down into a manageable portion. Saute mixture until the kale is just wilted but still a bright green. Season lightly with kosher salt and black pepper. Immediately remove skillet from heat and allow to cool completely while you assemble the dough and frangipane.

3. Make a small well in the middle of the flour and butter mixture. Add 4 tablespoons ice water and, using your hands, gently combine the water into the flour mixture. The goal is to be able to pick up and squeeze the dough into a ball with your hands, so if the mixture is still too dry, add another tablespoon of water and continue to mix until all ingredients are thoroughly incorporated. Lift dough ball out of the bowl, leaving any dry bits behind and place on a sheet of plastic wrap.

4. Bring the plastic wrap around the dough tightly. Press down on wrapped dough so that it is in a flat disc shape. Refrigerate at least 30 minutes before rolling, while you assemble the frangipane. At this point, preheat the oven to 375 degrees Fahrenheit (191 degrees Celsius).

5. Make the frangipane: Combine pecans in a food processor with the salt and Parmesan or nutritional yeast. Pulse the mixture until the pecans are finely ground. Add butter and miso to the mixture and pulse until no large chunks of butter are visible. Add eggs, wine and flour to the food processor and pulse until just incorporated. Your frangipane should be soft and easily spreadable at this stage. Scrape mixture into a bowl and keep at room temperature until ready to use.

6. When both the galette dough has rested for 30 minutes and the kale filling has cooled completely, it’s time to assemble the galette. Roll out the dough between two pieces of parchment paper into a 14” circle, about ¼” thick. Carefully transfer dough circle to a sheet tray lined with parchment paper. Spread the frangipane evenly over the surface of the dough, leaving a 1” border around the side of the dough.

8. Using a pastry brush, brush the sides of the dough with the egg wash and sprinkle the grated cheese over the sides, taking care not to let too much cheese fall onto the sheet tray.

9. After the galette has rested, bake galette for 45-60 minutes, rotating once halfway through..

10. When the galette is browned and incredibly fragrant, remove from oven and allow to cool for at least 15 minutes before slicing. Serve warm or at room temperature with a glass of crisp white wine.

11. Tightly wrapped, the galette will store for 3 days at room temperature and up to 5 days in the fridge.
‍

The dough, frangipane and kale mixture can be made up to 3 days ahead and stored in the fridge until ready to assemble. Tightly wrapped, the dough can be frozen for up to 3 months. Allow frozen dough to gently thaw in the fridge overnight before using. If making the frangipane ahead, allow to come to room temperature before using so that it has a spreadable consistency.