Celebs Eat This Salad Pizza and You Can Too

There’s no shame in taking down a whole pizza just on its own, but many of us often balance out the thick cheese and spicy pepperoni with some kind of crisp green salad on the side. But what if those two things combined into one big salad pizza? If that sounds like a bit of a retro idea, well, it is — but it’s one that’s worth bringing back from dead chain restaurant menus.

The first time I ever encountered a salad pizza was in the early ‘90s at a now-closed location of the Cheesecake Factory in Brentwood, California — a celebrity-heavy neighborhood on the westside of Los Angeles. The excitement of ordering the dish was matched by how disappointing it was to receive a soggy, wilty and thin-crusted plate. I don’t think I was the only one who thought it sucked, because it’s been off the menu for many years now.

The nearby California Pizza Kitchen in Brentwood also had a Tricolore Salad Pizza on the menu, which was a thin, Parmesan-topped crust served with balsamic vinegar, cherry tomatoes and honey Dijon dressing. That particular CPK is still in business, but nowadays you won’t find this dish anywhere except in copycat online recipes. You can order a salad and you can order a pizza, but you can’t order a salad pizza.

Clearly, our corporate American dining overlords declared the salad pizza dead some decades ago, but restaurateurs across the country have resurrected it here and there. L.A.’s Jon Shook and Vinny Dotolo joined that list in 2015 when they brought the concept to their Hollywood restaurant Jon & Vinny’s with Salad Days, a sauced pie crowned with curds of caciocavallo cheese, Little Gem lettuce, red onion, Sungold tomatoes, pepperoncini, and creamy Italian dressing.

I got hooked on Salad Days in 2019 when Jon & Vinny’s opened a second location near my friend’s house in Brentwood, literally just steps away from that old Cheesecake Factory. I order it whenever I’m in the area. My first visit there came with an A-list celebrity sighting of Gwyneth Paltrow, who lives nearby and probably also orders salad pizza. I have since learned that the original location is a favorite of “Kete,” a.k.a. Kim Kardashian and Pete Davidson, who were said to have ordered a Ham & Yeezy pizza (smoked ham and mozzarella with vodka sauce) after the premiere of her new reality show. Jon & Vinny’s also has a number of brilliant breakfast pizzas that dispel the notion that pizza shouldn’t be eaten in the morning, but that’s another story.

Since I live about 400 miles away from the restaurant, I created my own version at home to satisfy the frequent cravings. Instead of cheese curds, I drown the crust with shaved Parmesan and add mini fresh mozzarella balls on top. I also prefer to use a creamier salad dressing such as Ranch, and imagine that Thousand Island would also hit the sweet spot.

Salad pizza is way too rad to just live and die in the ‘90s — it’s a brilliant way to prepare those store-bought dough balls that you never quite know how to use. I can eat half to three-quarters of my semi-homemade salad pizzas in one sitting, and I think about that last piece for the rest of the day.

Goodbye to having to decide between salad and pizza. With this recipe, you can solve those pesky internal conflicts and have it all in one bite. 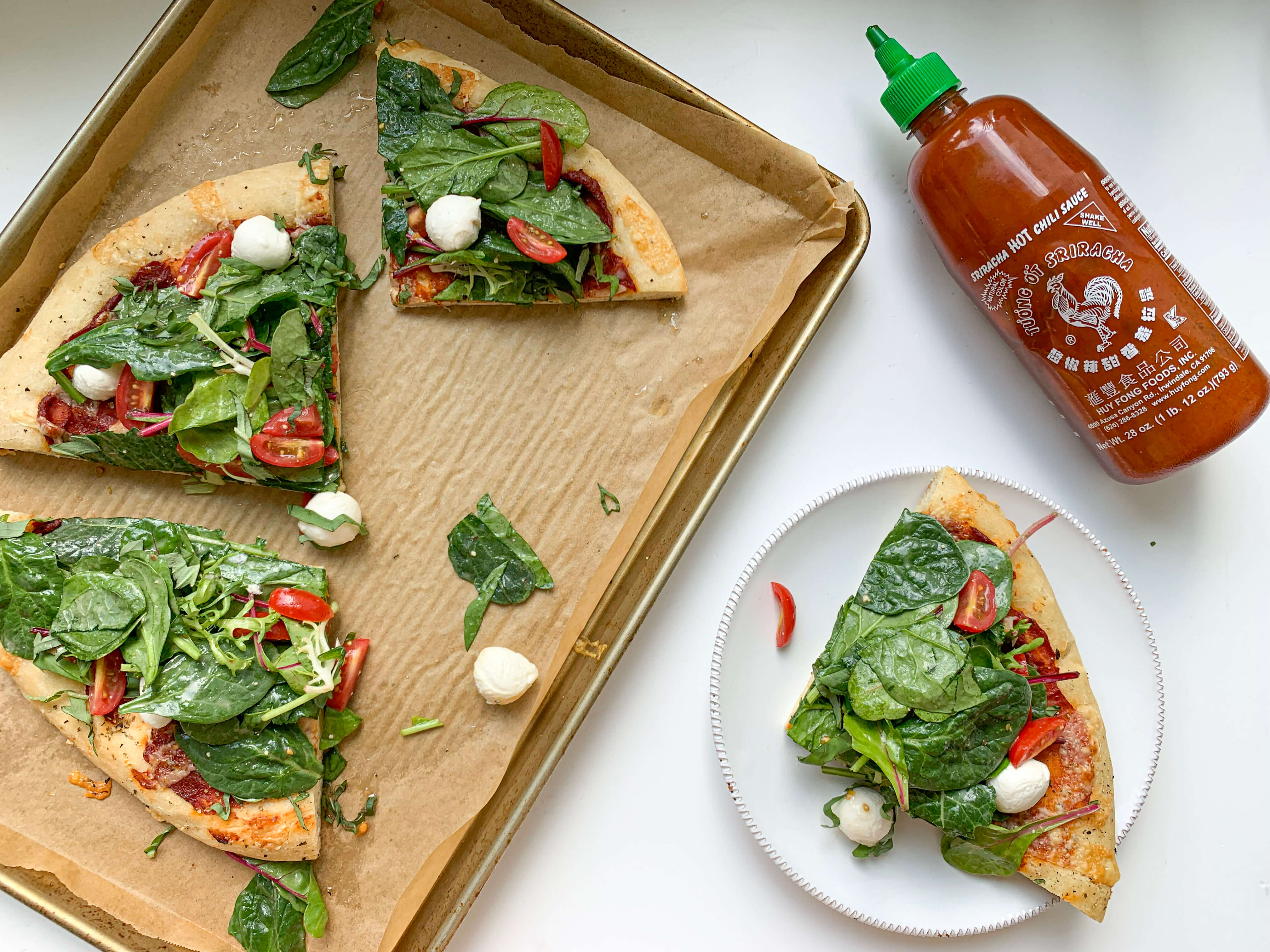 1. Preheat the oven to 450°. Let the pizza dough sit on the counter for at least 20 minutes to make it easier to stretch and handle.

2. Carefully stretch and shape your dough ball into a roughly 10-inch circle on a baking sheet lined with parchment paper. I like to keep it fairly thick to hold all the salad up and not get soggy. Make the crust walls a bit thicker than the rest of the pie so that you almost have a very shallow bowl shape.

4. Bake for 15-17 minutes until the cheese is brown and bubbly. Cool for 3-5 minutes, then top with slivered basil.

5. Cut pizza into four pieces before adding as much arugula, lettuce, tomatoes and mini mozzarella balls as you want on top of each piece, then drizzle with dressing and Sriracha (if using). Serve immediately.