My Kids Wanted Waffle House Hashbrown Bowls, so I Disappointed Them With This Spinach Version, and They Loved It

Yeah, me neither. I have young kids.

Not like it matters, of course. With the pandemic, I haven’t seen the inside of a restaurant of any kind in about a year -- fine or otherwise.  We’re handling it, though my youngest son does miss his favorite “fine” dining experience: Waffle House.

The glossy counters. The open-air kitchen that feels like it hasn’t changed since the 1950’s.  (Seriously, even when they build a new one, it’s like they transport the kitchen, used, to the new build.) It’s our kind of place.

My son’s love affair with the big WH started two summers ago when he learned that they almost never close, the exception being with the approach of a particularly disastrous hurricane. It’s an urban legend that some government agencies look to them to gauge the severity of a coming storm: evacuate if the WH closes. This, and the opportunity to sit at a bar and watch your food being fried seals the deal for him. He likes danger. He is a devotee.

So, when visiting a Waffle House wasn’t an option, I set out to recreate his menu favorite item, the Hashbrown Bowl. But, I knew that if I was going to be a decent parent, I had to make it healthier. Which wasn’t hard, honestly. Many of the menu items at The Waffle House fall into two categories: “carbs” and “carby-er carbs.” Beige is the predominant food color there, and this is perfect. Beige is delicious, and it accentuates the yellow and black décor.

My hashbrowns needed some green, though, not just for color, but for vitamins. My son is a purist when it comes to the dish: potatoes and sausage with a splash of ketchup. Adding a veggie on top wouldn’t cut it; I needed to sneak it in.

I decided to shred some spinach to add to the shredded russets. It would fry up nicely, but I wasn’t sure how my little epicurean would handle the flecks of green in his bowl of gold.  When I presented it to him with flair, he looked at me skeptically.

“What’s that?” he said, forking the green.

“That,” I said smiling. “is some flavor enhancer. You’ll love it.”

“What’s it called?” he asked, curious.

He agreed he would, after a shot of ketchup for courage. He dipped his fork into the greeny-gold goodness, took one bite, and before I had even started dishing a serving for his brother, he asked for seconds.

At my kitchen table, the ambiance is certainly different, but we don’t close for hurricanes. And, according to the kids, the Hashbrown Bowls on our menu are even better than the original. 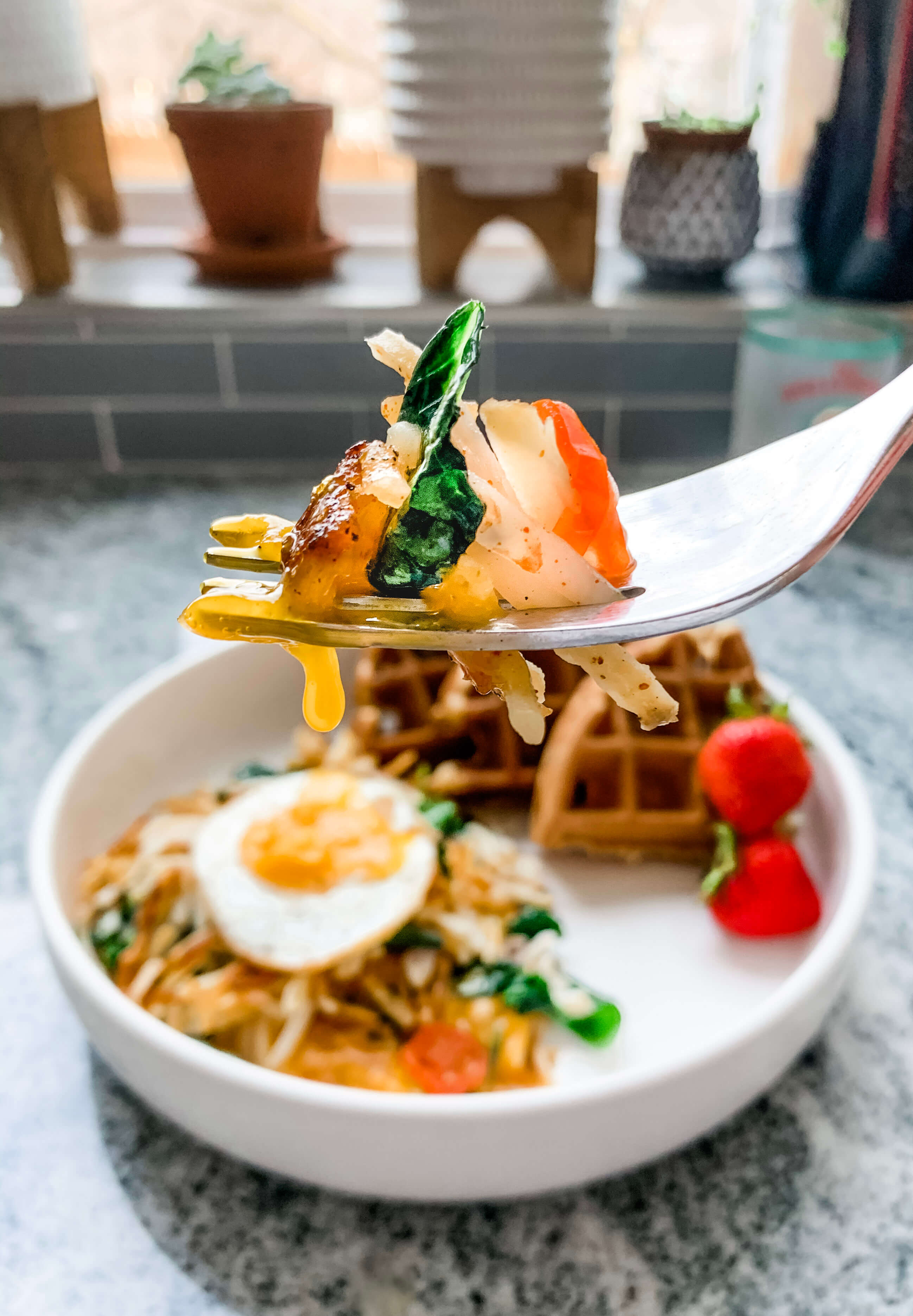 1. Preheat oil in a large pan (we recommend a non-stick skillet) over medium heat for 1-2 minutes. You want enough surface area in your skillet to make sure the majority of your hashbrowns are touching the pan. When oil is hot but not smoking, drop in hashbrowns and make into an even layer with your spatula. Sprinkle on some salt, pepper, and that paprika here.

2. Put the lid on and let the oil do its job. The key here is to let one side brown before flipping the hash. You'll know when it's browning because it will start to visibly brown at the edges of the pan, and you should hear some nice sizzling when the lid is removed.

(Note: if using freshly grated potatoes...and good for you if you take the time!...make sure those russets are dumped into a water bath once shredded to keep them from oxidizing in the open air. Before putting them in the skillet, drain and pat dry with towels to get all of the moisture out. Don't skip this step or you'll boil your taters, not fry them, and my grandmother would “tsk” loudly.)

3. Prep your spinach. 1/2 cup of chopped spinach is about a loose handful. After your hashbrowns have been browning away for nine minutes or so, take the lid off the skillet and throw in that spinach. It will start to wilt nicely, which is what you want. Return the lid and wait a bit before checking to see if the spinach has fully wilted. It'll take a few minutes. If you're adding diced onions and peppers, now's the time to add those as well. Spread them out, now, so they're not in a clump.

4. After you see the spinach has wilted, go ahead and flip your hashbrowns in sections, mixing the spinach and hash together. When you flip it, your browns should be nice and golden on the underside. If not, it's not ready yet...give it some more time on that side and check your temp. (Medium should do it! Resist the urge to crank it up, or you'll get ‘em too dark.) Pat it back down with that spatula so that most of the mix is touching the pan, add more salt and pepper, and put that lid back on. You have about seven more minutes of cooking time if things are browning nicely.

Ideally you only want to flip the browns once, but sometimes I give it two flips if the heating surface is uneven.

5. As it's finishing off, figure out how you want to top them! As mentioned, one of my boys is a purist: sausage and ketchup only.

My other son loves to throw the hashbrowns through the farm: sausage, eggs, cheese, and ketchup. Get those eggs in a separate pan here and get them cooking.

6. Remove the pan from heat and with a spatula, flip a section to make sure it's done. If it's not as brown as you'd like, put it back on for a minute or two, but watch carefully. Hashbrowns will become hashburnts on you quickly if you don't tend them.

Split up the hash into two bowls, throw on your toppings, and enjoy.

If you're making for more company, the size of your skillet will determine how many browns you can make at one time, but the whole thing scales nicely.

Can you add more spinach? Sure! But the more you add, the less potato you taste when you fry them. Some like that (I do), but this ratio fits well with my boys.