I’ve been to the English countryside only in the works of Jane Austen, but I was once invited to the rolling green spaces north of New York City. The house was owned by a successful, very rich English expatriate — a well known man in the city I shan’t name (yes, I’m saying “shan’t” because I’m channeling the British vibes) —  whom a friend had scored as a boyfriend. Certainly there were shades of Mr. Darcy. The house may even have been a manor, since the man had a farm on the lands. I learned many English-countryside things during my stay, including the principles for a surprising, simple, sophisticated salad that works well with arugula and green vegetables. (Or arugula and freezer ingredients…shh, don’t tell the other guests at Pemberly.)

Country houses within an hour of New York City are not my usual weekend go-to, and when I arrived I was curious to see all the details of this hidden-behind-the-hedges way of life. There was a salt-water swimming pool surrounded by a rustic, tiled-stone patio. The outdoor dining table was shaded by an arbor of grape vines. All the rooms and nooks and walkways of the sprawling house were painted in rich, old-world colors or wallpapered. My friend, much more bohemian than her surroundings, was definitely an Elizabeth Bennet, madly in love but also down-to-earth, and with a sardonic eye for the foibles of the aristocracy. She’d made some of the rooms her own by adding certain touches to the walls or furniture — I was particularly impressed that in a room full of imposing deep sofas and English armchairs, she’d hand-painted whimsical little dots on the lampshades.

It’s funny how things that are outside of our daily experiences can be so memorable. I’ve been to many houses, but this one stood out. Some of the things I’ve carried with me from the trip were trivial, such as that piling books on surfaces such as coffee tables and side tables is a legit “style.” (My husband considers it clutter, but he’s wrong.)

Another is the truth universally acknowledged that different kitchens cook differently, as contestants on the "Great British Bake Off" are always discovering “in the tent.” You cook something regularly at home, but when you try it somewhere else, it doesn’t work out. Maybe the oven is hotter or colder, the pan is thicker or thinner, or the flour absorbs more or less water — it’s a mystery. Alas, I discovered this while trying to amaze my friend and her guests with a tray full of popovers, something I make all the time at home but on this particular weekend were underbaked and didn’t pop.

Thankfully, my friend stepped in and replaced my culinary failure with a simple miracle: an English countryside salad that popped in a way all its own. This magical salad, which I make to this day, consisted of arugula, green peas (also known as English peas), asparagus, and shaved pecorino cheese, with lemon dressing. It was unusual to me because it mixed raw and cooked vegetables, and was all one color, yet had so much bright, fresh flavor.

It’s also the kind of salad you can iterate on, and I often do.  You can make a version of it anytime you have arugula with stuff that’s probably on hand, like frozen peas and shavings from a wedge of Parm. Or, in the more-glamorous direction, you can substitute fava beans for the asparagus. (I think of favas as restaurant food, because they’re such a hassle to peel.)

It’s only recently that I discovered a similar salad — with arugula, fava beans and green peas — in "Tender" by the legendary English food writer Nigel Slater, a book which would have been new the year I visited that house. I’m sure my friend had it. The book is about cooking from the perspective of a gardener, and has the earthy and casual approach that has always made me love Slater. Way back, his cookbooks were the first I noticed to have dirty spoons and crusty loaves of bread with bites taken out in the photographs. To me, Slater’s style presents the best way to enjoy the English countryside — with casual, fresh food and delicious local produce, among good friends. Bring along a Jane Austen novel if you like. 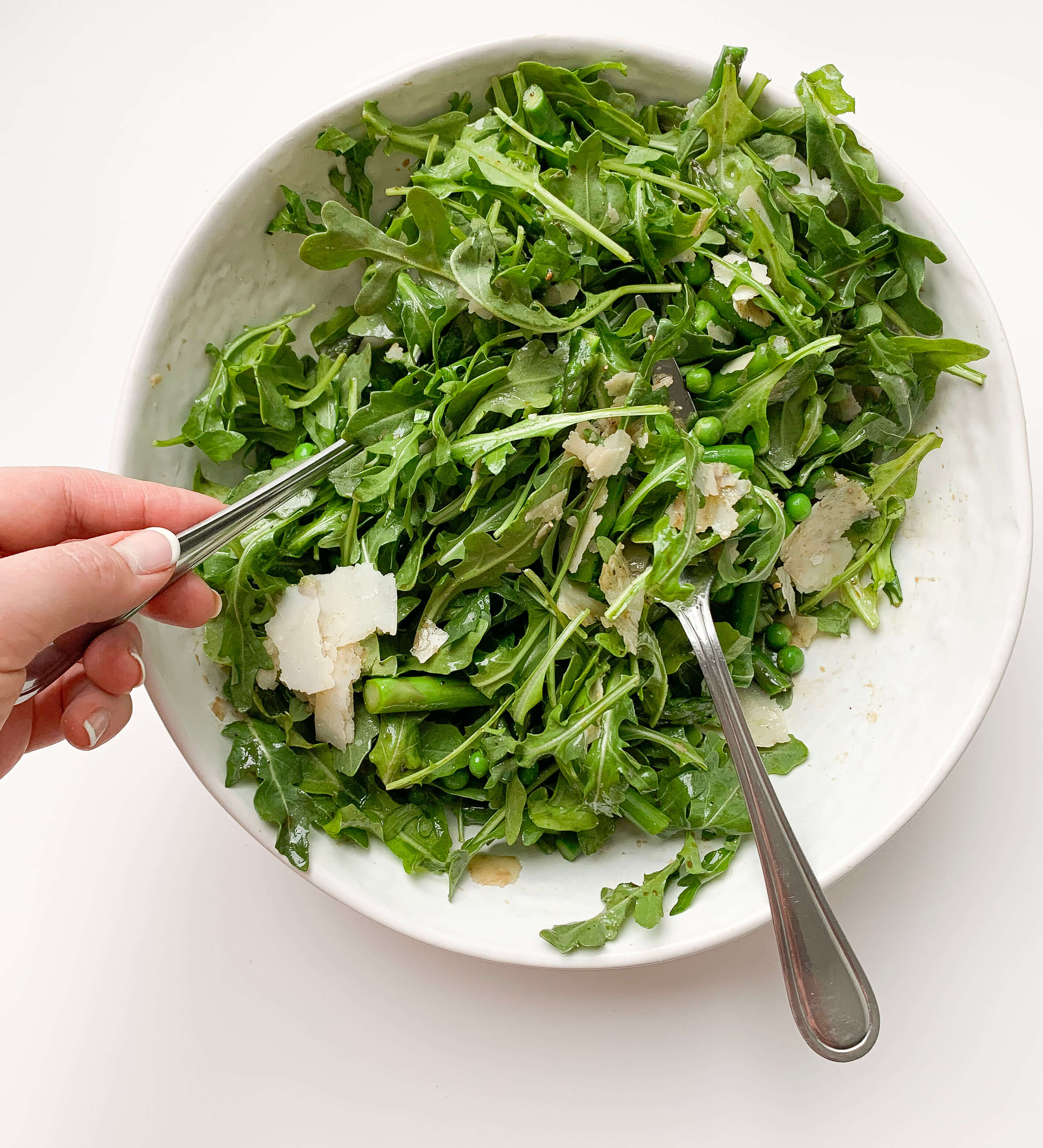 1. Blanch spring vegetables: Bring 2 quarts of water to a rolling boil; add ½ cup of salt and boil until dissolved. Blanch the peas and asparagus for 90 seconds, then remove from the boiling water with a spider/slotted spoon or empty the pot into a colander. Once drained, immediately place the vegetables into an ice bath for no less than 5 minutes. (Note: asparagus that is the thickness of a pencil or thinner should blanch for only 60 seconds; add it to the pot 30 seconds after the raw peas go in. If using frozen peas, those should blanch for only 60 seconds as well; add 30 seconds after thick asparagus, or add to the pot with thin asparagus and cook both for only 60 seconds.)

2. While the vegetables cool, make the dressing. Combine all ingredients in a small bowl and whisk until the vinegar is emulsified. Season to taste.

3. Place the arugula in a salad bowl. Add approximately half the dressing and toss to combine. Season to taste. Add peas and asparagus to the remaining dressing in the bowl and toss to coat, then gently spoon seasoned vegetables onto the top of the dressed greens. Check seasoning. Top with shaved pecorino. Serve immediately.