The Pork and Kale Soup I Walked 500 Miles For

I’m not going to claim that I walked 500 miles, and then walked 500 more, for a bowl of soup, but if I did say that, it would not be horribly far fetched.

Here’s the thing: I have a bit of an attachment to an ancient pilgrimage in Northern Spain. The Camino de Santiago is a ninth-century series of hiking trails that trace their way across Europe, culminating in the city of Santiago de Compostela. Thousands of people make the journey each year on foot, bike, and even horseback. I’ve been one of them. Three times. Twice across Northern Spain and once up from Portugal. I was set to go a fourth time in 2020 and then … 2020.

But even on my second trek in 2017, it became clear that repeat hikers sometimes raise some eyebrows. About three weeks in — as I sat bandaging my pathetically blistered feet — my fellow hikers asked me an important question, “What on earth made you do this to yourself again?”

I’d spent years trying to figure this out, but my mind came up blank. So instead, I started spewing out absurd responses like, “I missed my train to the airport!” or “There’s great soup in Galicia!” We laughed and left it at that. But in fact, Galician cuisine was probably on the list of top 10 things that drew me back.

Way up in the northwestern tip of Spain, the province of Galicia waited for all of us. As if guarded by a passageway of mountain roads, everything changes the moment you walk over its borders. Smoke billows from stone-stacked chimneys and endless layers of green mountains extend in all directions. It’s freakishly utopian yet entirely familiar. Galicia feels like a home you’ve known for years but somehow only just discovered.

As a skittish 20-something back in 2009, I ate one of the best meals of my life there. I was worn out, missing home, and chilled from the damp October air. At the top of a mountain in the ancient village of O Cebreiro, I ducked inside a small restaurant on a whim. A roaring fire warmed the room and one booth sat empty beside it.

Perhaps sensing my weariness, the kind man behind the bar passed me a ceramic bowl of steaming broth packed with greens, kale, chorizo, potatoes, and beans. It was my first taste of Caldo Gallego — the traditional soup of Galicia. Comfort, safety, and community were stewed into one dish.

Years later, with the end of my second journey on the horizon, I started counting down the days to Caldo Gallego — my casual joke about soup obsession becoming more real every day. I daydreamed about the unmistakable flavor of the greens mixing with the chorizo and the rich broth that sent you into the perfect post-walk slumber.

With only days to go, lush stalks of kale and turnip greens popped up in the fields we passed, taunting me.

We woke early to climb the hill to O Cebreiro, the sun just lighting up the forest by the time we reached the top. But it was 8 a.m. There’s no soup at 8 a.m. Croissants and Spanish tortilla, sure. But who serves soup for breakfast? I walked on, frustrated at my poor planning and the irrational hype for one meal.

We trekked for six more hours, the stalks of greens laughing at me as a cold mist soaked my shoes and clothing. When we finally reached our pilgrim hostel, I crashed into my bunk, exhausted.

Dinnertime arrived and a long table set for 30 stretched across the wooden cottage. The room quickly filled laughter as we traded Camino stories, finding common language where we could. As the red wine eased the pain in my feet, a fire roared in the corner.

Then the tiny Camino miracle occurred. The soup found me.

Just when I’d nearly forgotten we were there to eat, I saw it. A large cauldron of Caldo Gallego made its way around the table, each pilgrim ladling it into each other's bowls. The same feeling from eight years earlier returned just as quickly as it had before. I’d made it to my soup, to my table of community, to my fireplace. We had another week to walk, but this soup marked my arrival. 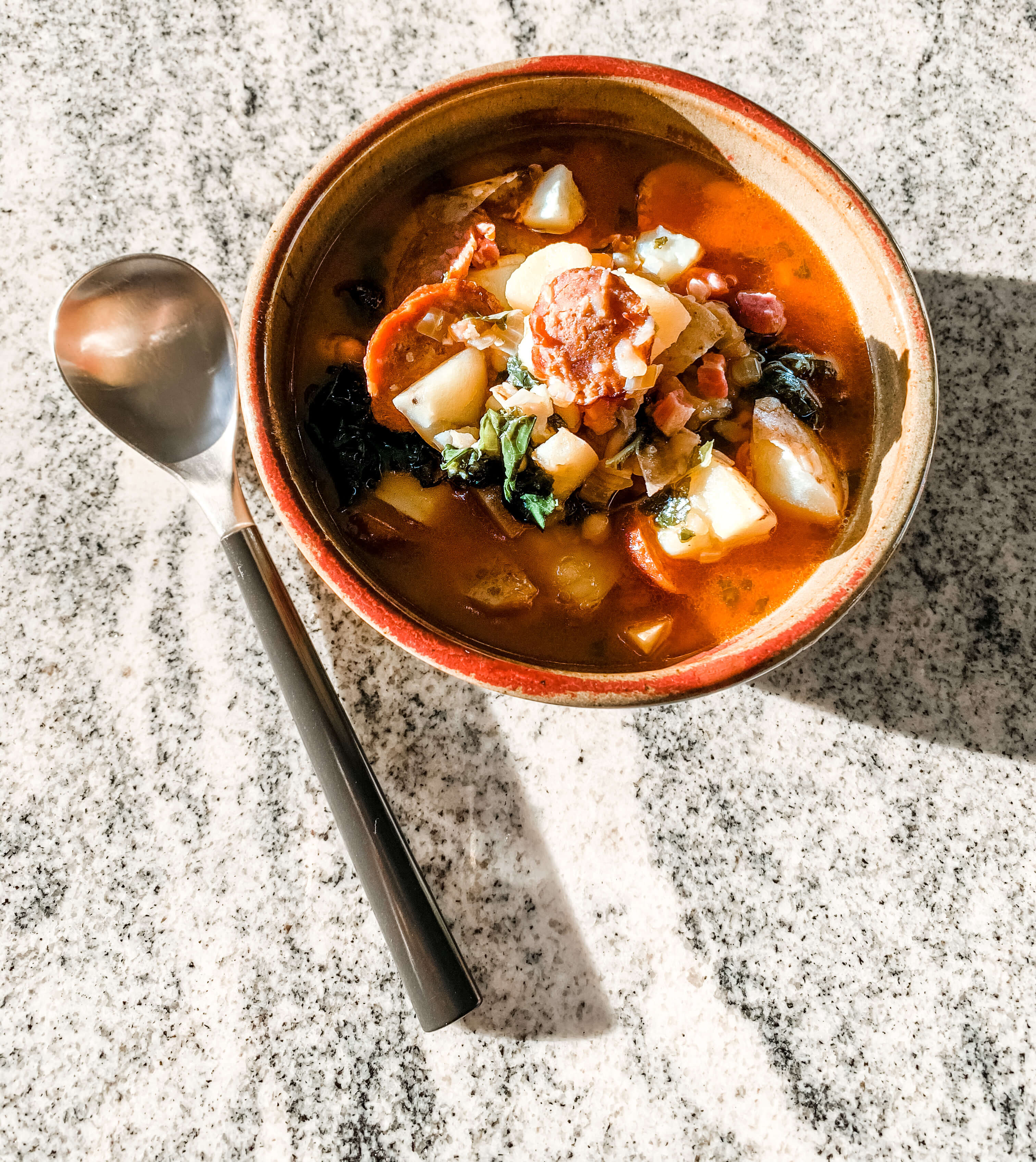